“Although I am not from the province and I was not born here, I feel fully involved”

On a dull afternoon in Longford, James Lowe is a man in high demand. After performing a series of shuttles to one end of Longford RFC’s impressive artificial turf pitch, he takes time to sign shirts and pose for photos with fans young and old who line up patiently along of the perimeter of the land.

He then stopped several times on his way to the nearby clubhouse before sitting down to chat about the past summer and what lies ahead with Leinster and Ireland. During our chat, a few nervous kids will walk up to the Leinster winger, before working up the courage to tap Lowe on the shoulder and bring forward a shirt or autograph book to sign.

Lowe has been a hugely popular figure on these shores since swapping his homeland for Ireland in 2017. His summer effort against the All Blacks only served to kick things up another notch – more than one young fan is quick to tell Lowe that they transported getting up early to watch the Test series.

He’s become a vital part of Andy Farrell’s Test squad, some well-documented defensive lapses at the 2021 Six Nations his only major setback so far. Johnny Sexton’s right boot is now the only foot in Irish rugby more important than Lowe’s left. This summer he played the full 80 minutes of all three Tests against the All Blacks, with his off-the-ball work and link-up play a crucial part of Ireland’s attacking system.

It’s been quite a journey. Shortly before Lowe walked into the room, Leinster head coach Leo Cullen recalled his first phone conversation with the former Chiefs player.

“I was trying to convince him that it would be the right time (to sign),” Cullen explained, “because in three years he would be eligible to play for Ireland, and I could hear him on the other end of the phone. thinking ‘what is this guy talking about?’

Lowe nods as the story is repeated to him.

“I never thought in a million years that I would have had the opportunity to represent Ireland and go back to New Zealand and win a Test series,” he says.

“(To) Come back here and people are still absolutely super ecstatic about it, super proud of what we’ve been able to accomplish. We were just there to do our jobs and I was a small cog in a finely tuned machine.

While the tour represented a career highlight for everyone involved, Lowe’s personal connection added an extra layer of meaning.

“Obviously growing up in New Zealand all the kids wanted to represent the All Blacks and I was exactly the same,” he continued.

I played professionally in New Zealand for five years and I was knocking on the door and the door wouldn’t open. I made the decision at 24 to leave and explore uncharted territory. I had only been away from home for three or four years but had never really experienced life on the other side of the world. It was a great opportunity to leave the nest and challenge myself in a new environment without the safety net of family and friends… We landed on our feet, my wife and I. We are absolutely thrilled.

“I think the decision was the right one in the end, right? Yeah it was (a huge decision). Obviously, the opportunity to play international rugby was there. The lure of that, the chance to come to Leinster to join a team that – I mean, the success speaks for itself. It was a very successful club before my arrival. I sat down with my parents and people I trusted, former coaches, mentors and I was, of course, I think this opportunity is really good and everyone was like whatever the whatever decision you decide to make, you do it 100% and we’ll take you back to the hills.

“You know, to go back to New Zealand, I gave some shirts to people who I thought deserved them because they helped me throughout my journey. Now we’re coming back to Ireland to continue .

For now, Irish affairs have been put aside. With the new United Rugby Championship season approaching, Lowe is busy getting back up to speed with a Leinster side entering a new campaign without a trophy to defend for the first time since arriving in 2017. 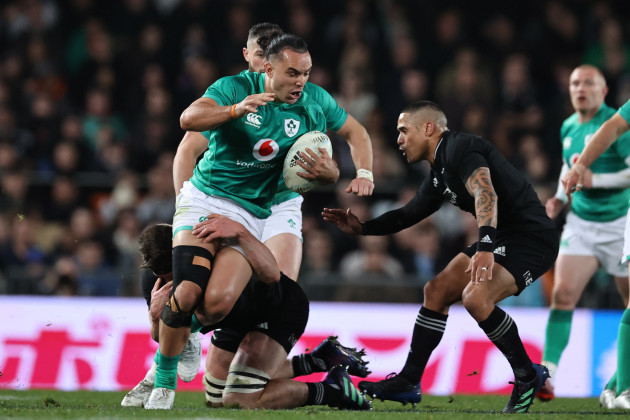 Lowe played the full 80 minutes of all three Tests against the All Blacks in the summer.

There have been a few notable departures – Devin Toner, Dan Leavy and Seán Cronin to name a few – but Leinster have also been busy adding new faces to the group.

During Thursday’s open training session at Longford, former Chiefs and Lyon center Charlie Ngatai could be seen doing some drills with his new teammates, while new contact skills coach Seán O’Brien and new offense coach Andrew Goodman were also busy working with the team. All three men have featured in Lowe’s rugby life before.

The 30-year-old shared a dressing room with Ngatai during his chiefs days.

“He’s a one of a kind legend, great father, four kids, crazy family, but he’s a very, very good rugby player and I think he’ll be a tremendous asset to us,” Lowe said.

“He’s a bit older now, the game intrigues him, he’ll always question things and analyze games in a very coached way. A huge wealth of experience and knowledge in there, and physically he’s at the top of his game. I think in the first round, you’re going to see Charlie Ngatai turn it on.

Another former team-mate, O’Brien, was a key figure during Lowe’s first weeks with Leinster, setting up the newcomer as the New Zealander found his feet in a new country.

“He’s still the same old Seánie. ‘Cause we just got back, I just had my first meeting where he got up and talked…He’s going to hopefully add some serious boon to our physique.

He always looks like he can play – don’t tell him I said that… I gave him a punch and he said ‘You know I can always let go if I wanted to.’ He was a very good addition. He has so much weight. I mean, just a few years ago he was lighting it up on the world stage. So if he tells me to hit someone or if I’m too soft, it’s probably true.

“When I was playing for the Māori All Blacks against the Lions (in 2017) he was like look, when you first come here, you can stay in my gaffe for as long, whatever. I was like ‘Ah sweet, cool!’ So when I was chatting with our manager, I said Seánie said I could stick it out for a week, and I came here during the November test round and he wasn’t even there. I saw him three or four times… In all honesty, he has a heart of gold, this man.

The addition of O’Brien seems essential for a team that has recognized its tendency to come up against some of the most physical opposition on the European Tour in recent years.

Lowe is asked to expand on that word he used in connection with O’Brien’s new role, “edge.”

“Ah black magic man. Physique was his game wasn’t it? He played the game top to bottom. I think there are quite a few dark arts in which we can try to improve. If we can do that, I think it will go a long way to how we want to play the game.”

Get closer to the stories that matter with exclusive analysis, insights and debates in The42 Membership

Lowe’s relationship with new offense coach Goodman — who hails from the Crusaders — goes back even further.

Goody was my PE teacher, I would have been 16 at Nelson College. He and his family are rooted in our hometown of Nelson. His last name in rugby circles carries a lot of weight. His father was an absolute legend and he happened to be my teacher. He happened to be my cricket coach, my rugby coach at school. I had the chance to play with him. He was my captain in the Tassie for my first two years.

“He will bring an aspect of rugby not too different from what Filipe (Contepomi) did. He is very open and honest.

“He literally walked into the room like, ‘Guys, I know you all know how to play rugby.’ He’s got Sexto (Johnny Sexton), he’s got Jammo (Jamison Gibson-Park), he’s got Garry (Ringrose), he’s got Robbie (Henshaw), he’s got all these players, Ross Byrne, everybody knows what to do. 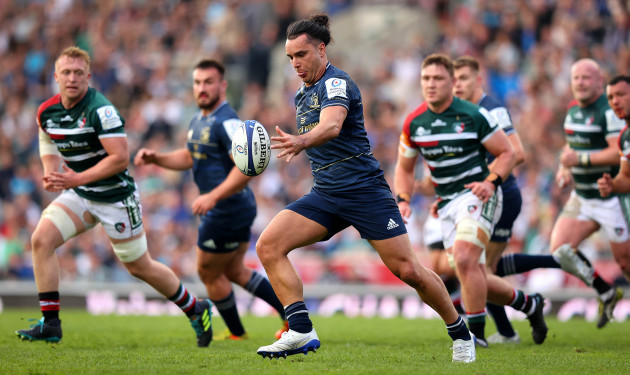 Lowe’s left boot has become a key weapon for Leinster and Ireland.

“All he’s there to do is put a structure in place that everyone can play. He has no ego, which is great. He’s a legend and I think he’s going to transform that bottom line.

For much of last season, in both the URC and the Champions Cup, Leinster were the team to beat. Losing two crucial games at the end of the campaign by no means makes them a bad team, but it puts more pressure on the upcoming season.

Such are the expectations of the province, finishing a season without a trophy looks like a failure. To do this twice in a row would almost be a crisis.

Those Champions Cup final and URC semi-final defeats still sting, but the group have also been boosted by Ireland’s achievements in New Zealand. With new players and new managers on board, things feel fresh ahead of the new campaign, which for Leinster kicks off with a URC first round to play Zebre Parma on September 17.

“I play with likes…I could go through the whole team. There are people I had huge admiration for (before I joined). There is a lot of pride in representing Leinster. Although I am not from the province, I was not born here, I feel fully integrated there and I try to encourage young people to get out of it.

“Jesus, I was completely maimed there (signing autographs). It was chaos. It’s cool that with our success we can put smiles on people’s faces in the community. If we can keep winning, I’m sure it won’t stop anytime soon.