Letta says far-right stronghold city of Lega is a ‘province of Hungary’ – EURACTIV.com

Speaking at a PD rally in Monza attended by 500 affiliated mayors, Letta said he did not want the “illiberal model” to be a reality in Italy.

“Italy cannot be a country that gives in to Putin and Orbán […] We want Italy to be the heart of Europe and true to its alliances,” he said.

A few kilometers away, in Pontida, Salvini swore to his far-right supporters a solid and lasting right-wing government.

“This is Italy, full of hopes and dreams and looking to the future,” Salvini told the crowd in the northern town of Pontida.

Italy’s anti-immigration leader Matteo Salvini, trailing far-right Giorgia Meloni in the polls ahead of next week’s general election, sought Sunday (September 18) to galvanize his far-right, populist and eurosceptic base.

According to the latest polls, the right-wing coalition led by Giorgia Meloni (Brothers of Italy – European Conservatives and Reformists/ECR) with Matteo Salvini’s Lega (ID group in the European Parliament) and Silvio Berlusconi’s Forza Italia (European People’s Party) is expected to win the September 25 elections against Letta’s left-wing coalition.

“Me, Giorgia and Silvio agree on almost everything, and for five years we will govern well and together,” said Salvini, stressing that there will be “no jokes and changes” on their electoral program common “sacred”.

Orbán puts the good coalition to the test

Last week in Strasbourg, EU lawmakers adopted a report pointing out that the Hungarian government is undermining EU values ​​and could therefore become a “hybrid regime of electoral autocracy”.

“Orbán won the elections, several times even by a wide margin, with the whole rest of the constitutional arc lined up against him: it’s a democratic system,” Meloni told the media in defense of the Hungarian prime minister. 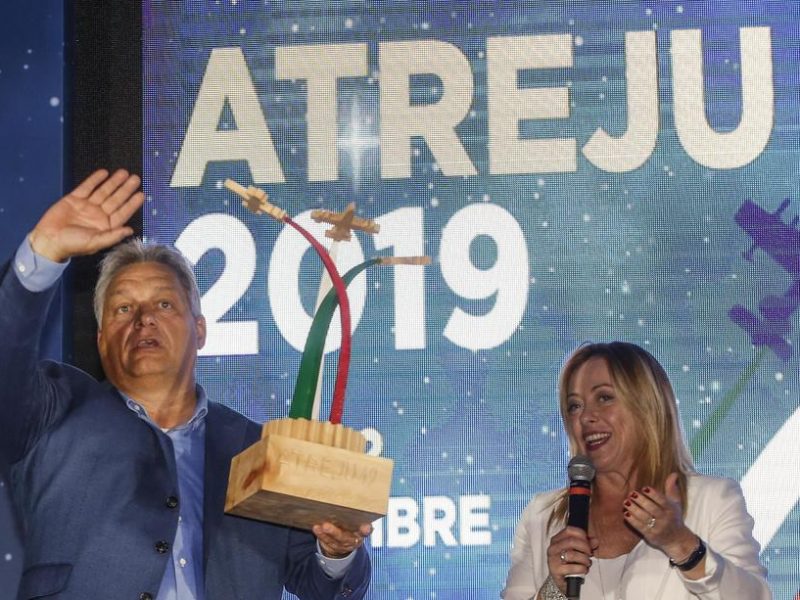 Salvini’s Lega are also backing the Hungarian leader, but Forza Italia’s Silvio Berlusconi is keeping a distance. An effort not to break the line of his European political family, which expelled Orban’s Fidesz party from its ranks.

In particular, Berlusconi said it was “undeniable” that Orbán is a democratically elected leader and must be respected as such.

But he added: “It is perfectly clear that our point of reference in Europe is the European People’s Party; it certainly cannot be Orbán. His policy is far from ours, his vision of Europe too”.

According to Berlusconi, “alliances in Europe must be made with great friendly countries” to protect Italy’s national interest.

For their part, European Socialists have warned that Italy will face the risk of “organisation” if Meloni comes to power.

“A radical right-wing government in Italy could open the door to an ‘orbanisation’ of democracy in an EU founding state,” Udo Bullmann, German MEP from the social democratic party SPD and former leader of the EU, told EURACTIV Italy. of the S&D. August 31.