In 587 the Irish monk St. Bredan died. He is known to have sailed across the Atlantic with two other monks in a hide boat and possibly traveled as far as North America. (Researchers question whether the trip was factual or fabulous.)

In 1855, the Reciprocity Treaty between Canada and the United States came into effect.

In 1871, British Columbia was allowed to become Canada’s sixth province.

In 1881, the first electric tram was put into service in Germany.

In 1930, uranium was discovered in a mine in Ontario. The mine was to produce fuel for the atomic bombs dropped on Hiroshima and Nagasaki during World War II. The province’s uranium mines were closed in the late 1990s, mainly for economic reasons. By then, thousands of miners had been exposed to excessive amounts of radiation.

In 1930, Canadian prospector Gilbert Labine discovered a valuable deposit of pitchblende, the main source of uranium and radium, at Great Bear Lake in the Northwest Territories.

In 1943, German troops destroyed the main synagogue in Warsaw, the Polish capital, and Jewish resistance in the Warsaw ghetto collapsed after 30 days of fighting in World War II.

In 1960, an American-Soviet summit in Paris fell apart on its opening day when the Soviets leveled espionage charges against the United States following the downing of the American U2 spy plane. 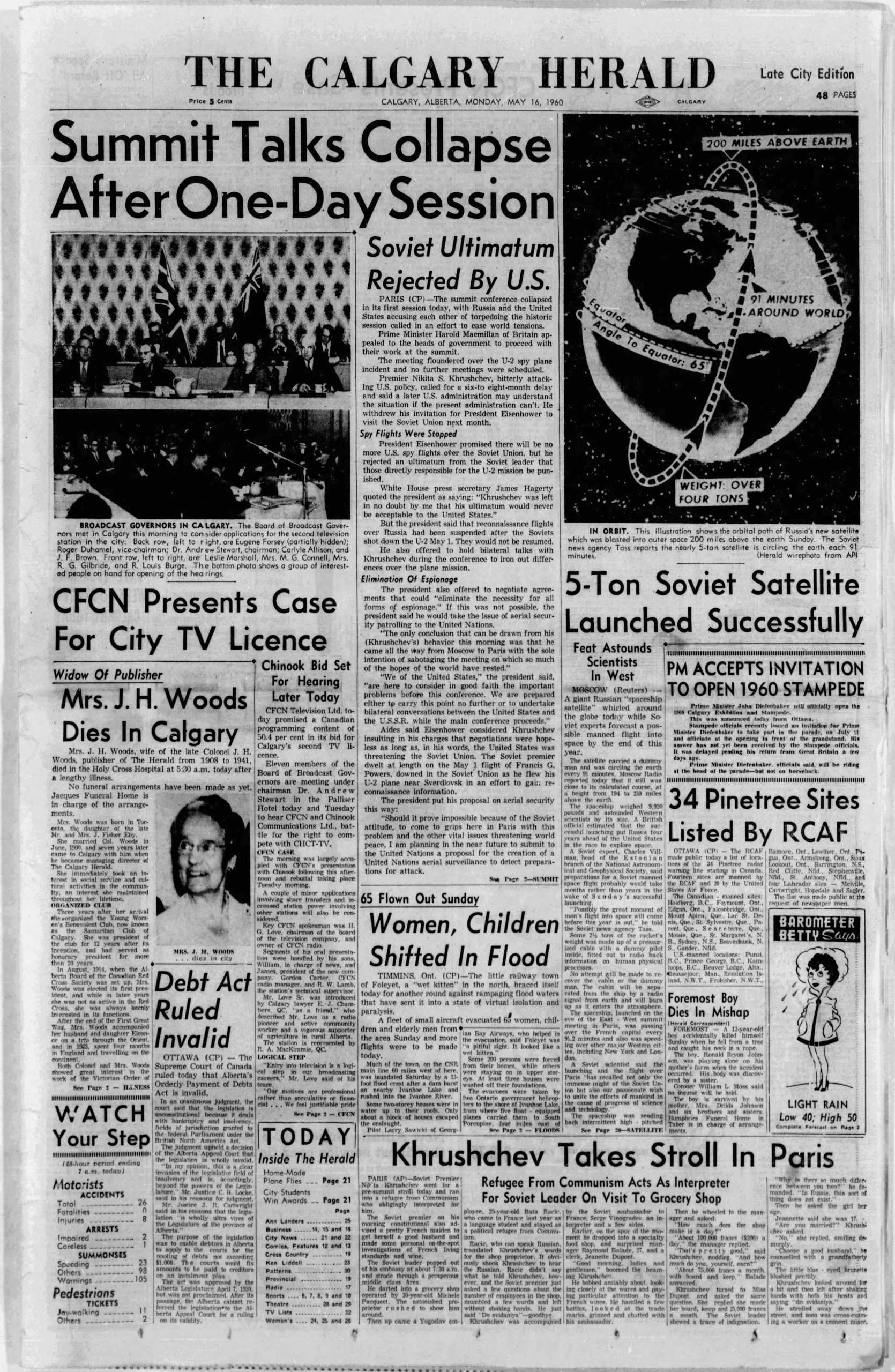 In 1988, US Surgeon General C. Everett Koop published a report stating that nicotine is similarly addictive to heroin and cocaine.

In 1990, Muppets creator Jim Henson died of a bacterial infection at the age of 53. 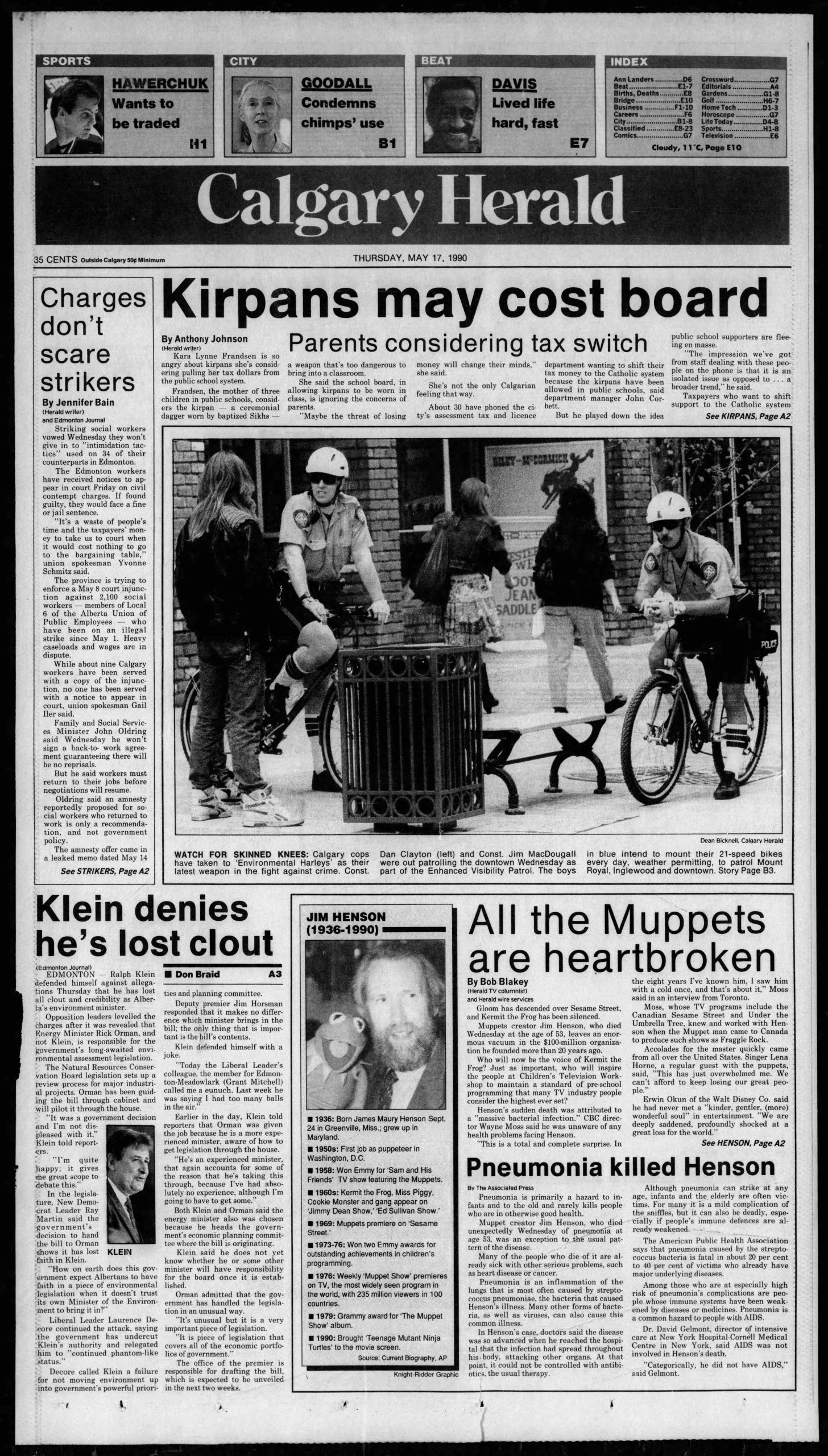 In 1990, a fire broke out at the largest tire dump in Quebec, in St-Amable near Montreal. The dump contained more than three million tires and the fire raged for four days before being extinguished.

In 1991 Queen Elizabeth became the first British monarch to address the US Congress. 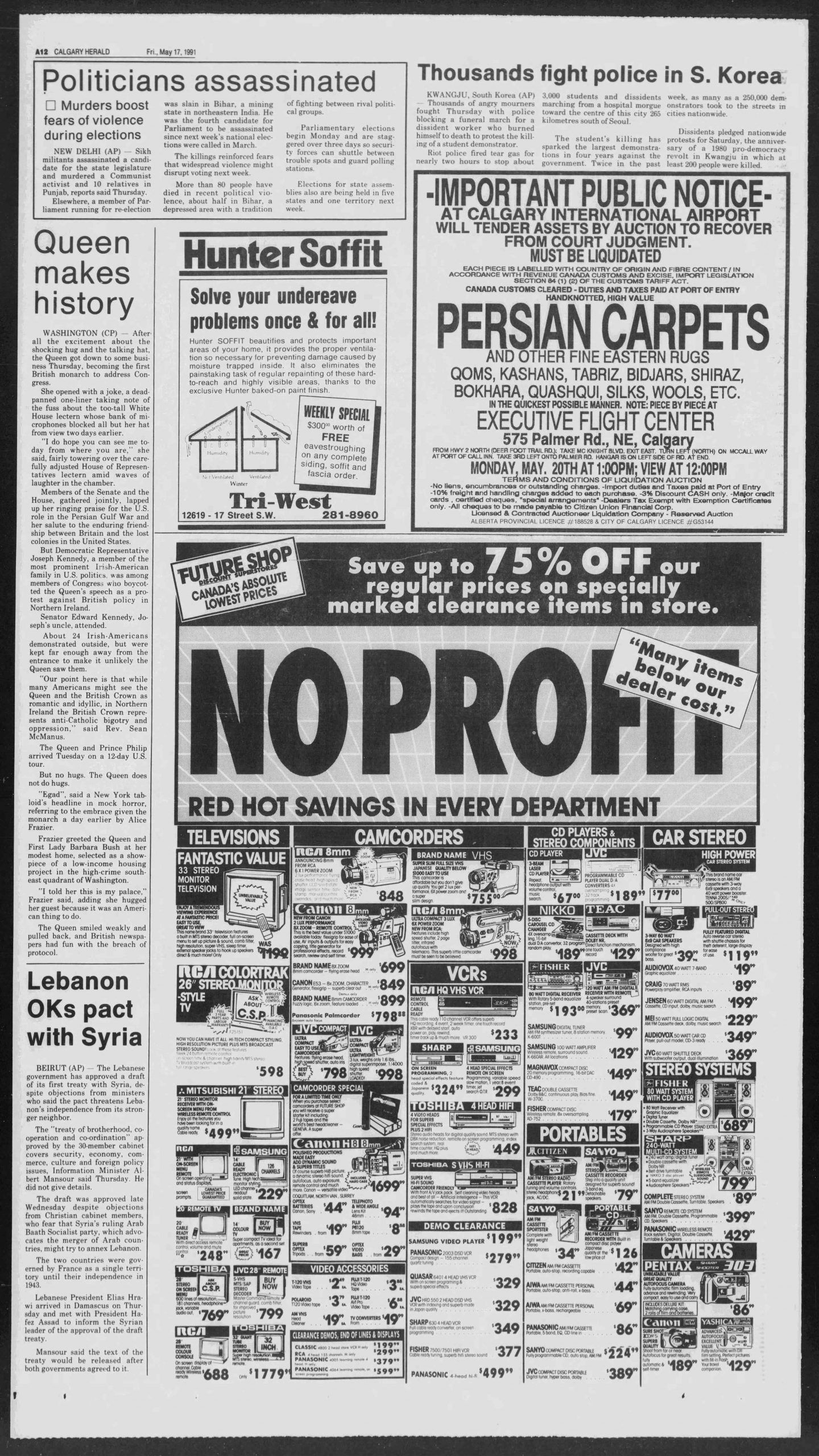 In 1997, the 16 member states of NATO ratified a historic agreement with Russia. This gave Moscow a voice, but not a vote, in NATO affairs and decisions. Russian President Boris Yeltsin said the deal addressed his government’s concerns about NATO’s expansion into Eastern Europe.

In 2001, the federal government ended its involvement in the mining sector when the Prince Mine in Sydney, Nova Scotia, was the last operating mine owned by Devco, a federal Crown corporation.

In 2001, Gordon Campbell led the BC Liberals in the biggest electoral landslide in the province’s history. The Liberals won 77 seats, compared to just two for the NDP under Premier Ujjal Dosanjh.

In 2003, a series of car bomb explosions tore through Casablanca, killing 41 people, including 13 suicide bombers. The bombs were all aimed at Western targets. A senior Moroccan official later said the suicide bombers had direct ties to al-Qaeda.

In 2006, the UN Security Council voted unanimously to send a UN peacekeeping force to the Darfur region of Sudan to end the killing of civilians.

In 2008, Governor General Michaelle Jean and Prime Minister Stephen Harper unveiled the Canadian version of the Victoria Cross, the highest military decoration that can be awarded to a Canadian.

In 2009, Kuwaitis elected women parliamentarians for the first time.

In 2011, the space shuttle Endeavor lifted off on its final journey and the penultimate flight of NASA’s 30-year-old shuttle program. The mission commander was Mark Kelly, husband of injured Arizona Rep. Gabrielle Giffords, who watched the launch privately from Kennedy Space Center (in January, Giffords was shot in the head during a meeting with voters in Tucson).

In 2012, a report by the Ontario Police Independent Watchdog found that police violated civil rights, unlawfully detained people and used excessive force during the 2010 G20 summit in Toronto. The report made 42 recommendations, including changes to the police code of conduct. Dozens of Toronto police officers have faced court after being charged with misconduct.

In 2018, Michigan State University announced its US$500 million settlement with 332 women and girls who were sexually assaulted by sports physician Larry Nassar in the worst sexual abuse case in sports history. He pleaded guilty to assaulting the victims on the pretext that it was treatment. (Lawsuits are still pending against USA Gymnastics, the U.S. Olympic Committee and an elite gymnastics club in the Lansing area.)

In 2020, comedian Fred Willard died at the age of 86. Willard rarely played leading roles during his 50-year career, instead making stunning appearances in films such as This Is Spinal Tap, Best in Show and Wall-E. He has also been nominated for the Emmy Awards four times.

In 2020, Phyllis George, the former Miss America turned sports broadcasting pioneer, died at age 70. George entered television in 1974 at CBS on Candid Camera and joined Brent Musburger and Irv Cross in 1975 on The NFL Today.

Sign up to receive daily news from the Calgary Herald, a division of Postmedia Network Inc.

Thank you for your registration!

A welcome email is on its way. If you don’t see it, please check your spam folder.

The next issue of Calgary Herald Headline News will soon be in your inbox.

We encountered a problem during your registration. Try Again